Why is the Curtain Closed ½ Way at the Presanctified Liturgy? 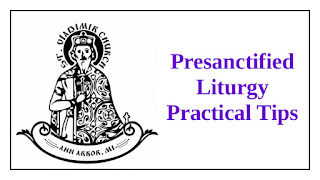 Several people have asked about this over the course of Great Lent. This is an excerpt from a presentation I gave to the clergy of the Eastern American Diocese two years ago. Hopefully it is helpful.

A) Closed curtain after Great Entrance: going of the Lord to His passion and the unattainable mystery of the salvation of men, hidden from many ages and generations (Col. 1:26)
B) Open curtain after the consecration of the gifts: people contemplate the sacrifice offered for the sins of the world while calling upon the Heavenly God as Father and saying “Our Father”

Nikol'sky, in his "Aid to the Study of the Liturgical Typicon of the Orthodox Church," writes as follows:

“At the Liturgy of the Presanctified Gifts, after the transfer of the Holy Gifts, the curtain is partly closed (its first half) and opened (its second half). It is closed for the same reason that it remains closed also at the full Liturgy after the Great Entrance, namely that the Entrance recalls the going of the Lord to His passion and is the unattainable mystery of the salvation of men, hidden from many ages and generations (Col 1:26) -- the mystery of the bloodless sacrifice of the Lord, "who is the God of ineffable and invisible mysteries, and with whom are the hidden treasures of wisdom and knowledge" (prayer at the Presanctified Liturgy after the Great Entrance). The curtain ought to be open after the Great Entrance, during the Litany before "Our Father," for the reason that at this time it remains open also at the full Liturgy. As at the full Liturgy, so also at the Liturgy of the Presanctified Gifts, at this time the consecrated Gifts are on the Holy Table, and the people (with the curtain open), while contemplating the sacrifice offered for the sins of the world, call with boldness upon the Heavenly God as Father and say: "Our Father."”

According to Nikol'sky, then, the half-open, half-closed curtain after the Great Entrance at the Presanctified Liturgy serves two functions: