Our Faith, the News, and Pandemic Fatigue: Less Bitter Food and More Combs Filled with Honey

I’m tired of Corona virus. Of the quarantines. Of the infection control measures. Of the conspiracy theories surrounding the pandemic and the vaccine. Of the selfishness of those that don’t care that the weak are dying and the medical personnel are pushed to the edge of sanity due to impossible work loads and can’t be bothered to inconvenience themselves in any way to help alleviate the medical crisis. Of those that look with disdain at someone who doesn’t wear a mask outside or alone in a car. Of the hyper-politicization of the entire thing. Of the divisions the devil has been able to sew in our society and the response of Orthodox people zealously joining his efforts in dividing humanity into enemies and allies (forgetting the key Christian teaching that there is only one enemy, and he is the one promoting all these divisions). Of those in power that are taking advantage of the crisis to attack those they inexplicably perceive as dangerous (read: those who have faith in New York, California, and other similar jurisdictions). Of those who have faith and act as if faith will magically save them when they violate infection control measures. And just everything about the pandemic generally. I’m tired of the news media on both the left and the right and its apoplectic reaction to those that don’t virtue signal incessantly (both the left and the right have their virtue signals – unless you can signal in both directions at the same time you are going to be castigated as evil and stupid by at least half the media). Of those who dismiss as ignorant extremists anyone who raises even the slightest concern about the long-term health effects of the vaccine. Of the elites that are so out of touch that they don’t understand that the economy is not a hypothetical construct (that is, that real people are really suffering real and serious economic harm because of the pandemic and the quarantines). I’m even tired of writing about it, and not many folks with an English minor ever write “I am tired of writing...” about anything. :) 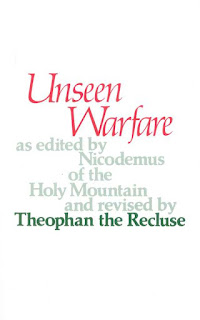 But my “I’m done with this – let’s just hold on until it ends and hope the divisions in society and the Church will not be permanent” attitude was pricked a little when I picked up “Unseen Warfare” last night for the first time in years. In fact, once I had the book in my hands I realized that I had never finished it. I probably stopped on Chapter 6 or 7. This is a very important book on the spiritual life for us as Orthodox Christians, although most people don’t know that this book was originally written by a Roman Catholic writer (Lorenzo Scupoli). It was then Orthodoxized, for lack of a better term, by St. Nicodemus of the Holy Mountain, and then revised again by St. Theophan the Recluse before it was published in Russian. The English version we have is a translation of St. Theophan’s Russian version. Then I got to Chapter 9. And despite my attitude of wanting nothing more to do with the pandemic, having read this chapter, I felt I had to share it, or at least the gist of it, here. Because I think and I hope it will be beneficial for our readers. And maybe help us to step back from our self-constructed barricades and begin to see the “enemies” we have created as those made in God’s image and struggling to attain to His likeness: just like us. We are all scared, cranky, and tired of it all. We have forgotten that we are to strive for moderation and shun extremes. I guess at least I hope reading this chapter will help us to stop making our collective response to the disease worse than the disease itself. Because the disease will eventually go. Whether the fruit of our collaborative efforts with the Evil One towards division will disappear quite as quickly is less clear. But perhaps we can begin to work on that problem now, by being attentive to this spiritual classic.

The title of the chapter is “On protecting the mind from too much useless knowledge and idle curiosity”. What a great title! And the chapter does not disappoint – that is exactly what it covers. It seems to me that this chapter was basically written for our spiritual situation today. Spoiler alert: very few of us reading this blog post will in turn read this chapter and will NOT have our conscience wounded when we see ourselves and our  gluttonous consumption of useless information called out there. One might even argue that social media = useless information. But I leave that equation to you. I only suggest you consider it as a possibility. 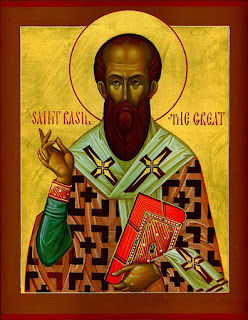 You can find the chapter in full here. St. Basil the Great is quoted prominently in this chapter: “Let listening to worldly news be bitter food for you, and let the words of saintly men be as combs filled with honey.” That is beautiful. And something that I wish I read, memorized, and put into action daily starting in March. And it is condemning. At least of me. How perniciously and incessantly our society entices us with the siren’s call of useless knowledge. Or at least it does me. I can’t judge you because only you know you. Well God does too, and probably better than you know yourself, and I guess that is not something we should ignore. So I would like to humbly suggest that this is where we should spend some serious time in the coming weeks:

1. Reading Chapter 9 – likely a couple of times (it is not long, but it is dense)

2. Praying to God to help us to find a more moderate level of consumption of useless information

I don’t say NO consumption of useless information. We probably can’t live completely with no knowledge of the world, what is happening in the world, etc. But we can almost certainly spend significantly less time consuming that information (especially via social medial platforms, which seem to drive us deeper into our own custom-designed rabbit holes with each subsequent article in our feed), and use that time for things that are much more spiritually profitable. Like prayer. And spiritual reading. And participating in the Divine Services. And engaging with our Parish Family. And spending quality time with our own family, if the Lord has so blessed us.

I’m not sure what else should be written here. Probably little or nothing. Less bitter food and more combs filled with honey! May the Lord grant that to us all as we continue our pandemic struggle.

Posted by Fr. Gregory Joyce at 2:15 PM No comments: