Thoughts on the Incompatibility of Xenophobia and Christianity 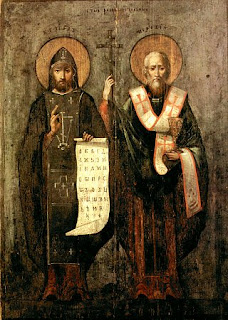 Today the Holy Church commemorates two of the great Equal of the Apostles, and those very important to us in the Russian Church, Sts. Cyril & Methodius. This seems to me to be to be a good day to share some thoughts on the incompatibility of Xenophobia and Christianity.

Love your enemies, bless them that curse you, do good to them that hate you, and pray for them which despitefully use you, and persecute you… (Matthew 5:44)

The history of the Church is replete with persecution. Many enemies of the Church have persecuted her in the hopes of destroying Christianity. And each of these persecutions has had the opposite effect to that which was intended. Tertullian wrote that “the blood of the martyrs waters the seed of the Church.” As persecutions increase so too does the Church grow both in the quantity and quality of its faithful children. Many persecutors have become Christians owing to the witness of the martyrs – even shedding their own blood for the True Faith.

We have real, significant theological differences with other faiths such as Islam and Judaism. However, we must clearly distinguish between theological disputes and personal animosity. It is completely permissible (and theologically unavoidable) to explicate differences in faith. Equating all faiths would be a frank betrayal of Christ. Refusing to honor the witness of the martyrs (many of whom were killed by Jews, Muslims, Pagans, and others acting out of religious obligation) would also be a frank betrayal of Christ. But we must state unequivocally: Xenophobia has no place in Orthodox Christianity and is absolutely contrary to our faith.

The vast majority of Orthodox Christians in the world suffered from a misguided and evil totalitarianism in the 20th Century. All of us – both those who lived in the freedom found outside the Iron Curtain and those who suffered behind it – are still subject to the great wound that this totalitarian system imposed upon humanity. The wound has not yet been fully cured, and the greatest danger that this wound poses as it slowly and fitfully undergoes healing is the totalitarian requirement that there be an “enemy” - an “other” - an extrinsic evil that must be sought out, fought, and destroyed. Without this identified enemy totalitarianism loses its power. And this need to identify an enemy persistently rears its head – especially during any time of political or economic difficulty.

The faithful children of the Holy Church are not immune from societal illnesses. If a society or even a portion of a society are infected with a persistent sickness then so too are the believers potentially subject to the same infection. The endless search for the “enemy” draws the faithful away from a God-centered existence to an existence centered on something completely foreign to a Christian. Any thing can become an idol – and when we spend our time seeking out and trying to destroy the “enemy” we move far away from God and into idolatry. This is completely and absolutely unacceptable and must be resisted with all our strength.

Behold, I send you forth as sheep in the midst of wolves: be ye therefore wise as serpents, and harmless as doves. (Matthew 10:16)

I would like to submit here that as Orthodox Christians we must resist Xenophobia in all its variant and deviant expressions, be that anti-Semitism, anti-Muslimism, or any other inappropriate hatred for the “other”. We must hold fast to the saving faith which the Lord has given us. But we must be an example to all men of Christian love, even in the face of persecution and death if need be. This is not to say that we must cease using the intellect the Lord has given us or ignore the realities of history. On the contrary, we are called to be the rational flock of the Lord and we should speak out against heresy and every evil as our Christian conscience requires us, remembering that it is important to undertake such public speaking out in the context of receiving a blessing from the appropriate ecclesiastical authority if that is at all possible. That being said, I suggest quite strongly that it is the Christian response to resist Xenophobia earnestly, calling to mind the words of the Apostle:

If a man say, I love God, and hateth his brother, he is a liar: for he that loveth not his brother whom he hath seen, how can he love God whom he hath not seen? (I John 4:20)

I look forward to hearing from our readers on this topic!
Posted by Fr. Gregory Joyce at 9:00 AM