Why do we accept vandalism in our parish church? 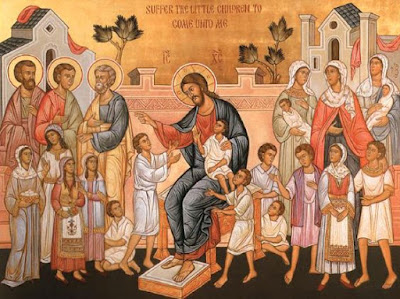 Vandalism might be too strong. When invoking the Vandals one probably has to be a little more precise. We are not talking about widespread destruction and looting. We are really talking more about mischief. Mischief that kids sometimes engage in. I did. I bet you did too. Kids do dumb stuff sometimes. Especially when parents aren’t looking or when other adults don’t step in to a situation because it is not their kid that is engaging in mischief.

Every person on my block knew my name when I was a kid. Every person on my block knew that if they called my parents and told them that I was doing something stupid or dangerous that I was going to hear about it from my parents when I got home and that I was likely going to be punished. And that I would know not to do it again. The reporting adult was not questioned. It was assumed that the adult was telling the truth despite any protestations on my part. We don’t live in that time anymore. I suppose we are all nostalgic for our youth. Even if that nostalgia is in regard to limiting our behavior. We can’t change the fact that those days are gone. Adults have learned to look the other way if it is not their kid. To pretend that it is not happening. To not overstep in trying to correct someone else’s child. Whether I think that is a good idea or not doesn’t matter. What does matter is this: we can’t accept that our children will be allowed to engage in mischief in our parish church. This teaches them disdain for God’s House. And when we get to that point it is time for me, as the Rector, to step in.

But I can’t be in the kitchen during the Vigil. I have to serve or hear confessions while the kids are in there ransacking the place, eating food there without any permission from anyone, and leaving victuals out to feed the mice. And I can’t be in the kiosk area to keep every poster that is put up from having the edges of the paper creased and folded so that something we spent hours preparing is ruined and our parish looks trashy to visitors because we can’t put up a decent flyer. Or to keep pamphlet holders and other things there from being broken. And I can’t patrol the memorial table and the other candle stands that have sand in them during the Divine Services while the kids play in them like sand boxes.

That is just the obvious stuff. That doesn’t even include things like carving in the wood furniture or dripping wax on the floor or the icons.

I get it – no one wants to be scolded by another parent for overstepping their bounds with that person’s kid. But I am telling you now that this is all inappropriate and that it is your Christian duty to step in and say something. You don’t have to (and you should not) punish the child. We are not hereby forming a branch of some secret police force. But children do silly things. Sometimes dumb things. Sometimes destructive things. They are kids. They don’t always think things through. This does not mean they are bad. They are learning. But they will become bad – and disdain the House of God – if we don’t do something about this. That is why we adults have to help them to do the right thing. They need to love God’s House and want to care for it as a Christian obedience – and we get there with some structure and a lot of love.

Here is how this will work. If you see a kid engaging in mischief and the kid’s parent is not around say something. If the kid doesn’t heed your words tell the parent. If the parent doesn’t do anything about it tell me. Easy. This is not a threat to anyone’s parenting. This is not overstepping bounds. This is seeing to it that “... all things be done decently and in order.” (I Corinthians 14:40). Any punishment necessary is at the hands of the parents, as it should be. This is not a call for punishment – this is a call for reasonable structure that will guide kids to the right approach to the parish church as God’s House. God’s House is a sanctified space – it is not just some old building. If kids engage in mischief at school or at someone else’s house you as a parent want to know about it and correct it. SO MUCH THE MORE SO IN GOD’S HOUSE!

Mischief in the church is unacceptable. Ignoring mischief so that a child begins to disdain the church is even more unacceptable. This must end beginning this weekend. People work hard to clean the church. People work hard to prepare flyers. People work hard to donate to the church so that nice things can be purchased to glorify God in His House. If we ignore our children when they engage in mischief we assure that they will never care for God’s House. And we will answer for that. And as your priest I will answer for it more than anyone. And thus, today’s note. Let’s do this with love. Let’s do this with cooperation. But let’s – we must – do this. For the sake our kids and for the sake our own souls.