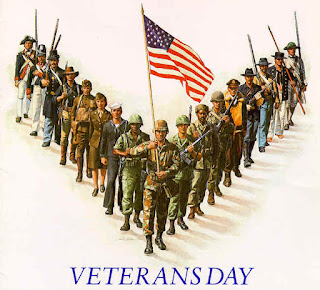 On the 11th day of the 11th month of the 11th hour the "War to end all Wars" ended. Today. 98 years ago. Sadly, that hope of the end of war that was manifest on that day has not yet come to pass. Perhaps it never will. But we should pray for that. Not just on this day - but always. Being thankful is an Orthodox way of life. Today let us be especially thankful for our veterans for their sacrifice on our behalf.

I would like to call to your attention the picture we are including here. We thank all our veterans for their sacrifice. This almost goes without saying. But note the diversity of the soldiers and sailors depicted there. America is a land of immigrants. Sadly, some of the older immigrants are reacting to the newer immigrants in a racist way over the last few days. This is completely inappropriate from an Orthodox Christian point of view and we must speak out strongly against it - openly and with zeal. Racism was condemned by the 1872 Council of Constantinople. We are fully bound by that decision. Not only should Orthodox people not be racists - they simply cannot be. It is theologically impossible:

“We censure, condemn, and declare contrary to the teachings of the Gospel and the sacred canons of the holy Fathers the doctrine of phyletism, or the difference of races and national diversity in the bosom of the Church of Christ.” (Article I of the Decree of the 1872 Council of Constantinople)

Let us pray for our country - and let us be a shining example of tolerance towards our fellow man - both the "old" immigrants and the "new" immigrants. This is the Orthodox Christian way. This is not to say that we should not have an opinion or weigh in on the immigration policies of our country. As noted previously and recently here - this is not inappropriate. But if we choose to comment our contributions should RAISE the level of discourse, neither falling into racism or the other extreme: disdain for the "lower classes" or the "uneducated" or the "uninformed" that exercised their right to vote in Tuesday's election and may have played a large part in the election of Donald Trump. Both of these extremes are completely inappropriate for an Orthodox Christian. Every human is made in the image of God - no matter his or her color, ethnic background, or for whom he or she voted in this year's election.

As those around us lose their minds in this regard let us keep ours, and let us pray for our country - especially on this day when we remember the sacrifice of our veterans. Their selfless defense of our nation against those that would destroy it should be an example for us in our days. If we can emulate them and their efforts this can unite us as "one nation under God", as it is written in the Pledge of Allegiance. May the Merciful Lord grant it!