Recap of Parish Discussion: “How do we as Orthodox Christians Deal with those Living Lives Opposed to the Gospel?” 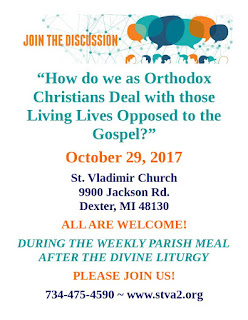 I would like thank everyone who participated in the parish discussion during Sunday's
lunch. The discussion itself was super, and people stayed for a good hour afterwards continuing to discuss among themselves the topic we tackled. And it was not a simple topic! And as we mentioned several times, there are significant generational differences in our approach to this topic. That is not good or bad – it is just the reality. Of course, in any such conversation there can be confusion. I am sure there was some of that. That is OK – we are not being asked to just address this once. We will circle back to this, just like we will circle back to the Matthew 25 conversation we had a few weeks ago. But to clear up one misconception that I spoke with someone about after the discussion: we are not calling you to go out and seek those who are living lives opposed to the Gospel. Those folks are out there. There are many of them. You will likely have to deal with them on some level sometime. But my intent was not to send out a mission in this regard. That being said, it is good for us to think and pray about how we will deal with these folks when we do need to. And living in this society the fact of the matter is that we will. To help in that regard I am publishing here the piece I read before we began the discussion. Again – I appreciated everyone’s input. This was meant as a discussion and not a lecture, and I think you got that. And having input from others unquestionably made this a more fruitful discussion for our parish! We’ll have another similar discussion on November 26, and of course you are welcome to ask any question you like when we have “Ask the Priest” this coming Sunday at the parish meal. Great work everyone!

From the Epistle of Mathetes* to Diognetus, c. 130

CHAPTER V -- THE MANNERS OF THE CHRISTIANS.
For the Christians are distinguished from other men neither by country, nor language, nor the customs which they observe. For they neither inhabit cities of their own, nor employ a peculiar form of speech, nor lead a life which is marked out by any singularity. The course of conduct which they follow has not been devised by any speculation or deliberation of inquisitive men; nor do they, like some, proclaim themselves the advocates of any merely human doctrines. But, inhabiting Greek as well as barbarian cities, according as the lot of each of them has determined, and following the customs of the natives in respect to clothing, food, and the rest of their ordinary conduct, they display to us their wonderful and confessedly striking method of life. They dwell in their own countries, but simply as sojourners. As citizens, they share in all things with others, and yet endure all things as if foreigners. Every foreign land is to them as their native country, and every land of their birth as a land of strangers. They marry, as do all [others]; they beget children; but they do not destroy their offspring. They have a common table, but not a common bed. They are in the flesh, but they do not live after the flesh. They pass their days on earth, but they are citizens of heaven. They obey the prescribed laws, and at the same time surpass the laws by their lives. They love all men, and are persecuted by all. They are unknown and condemned; they are put to death, and restored to life. They are poor, yet make many rich; they are in lack of all things, and yet abound in all; they are dishonoured, and yet in their very dishonour are glorified. They are evil spoken of, and yet are justified; they are reviled, and bless; they are insulted, and repay the insult with honour; they do good, yet are punished as evil-doers. When punished, they rejoice as if quickened into life; they are assailed by the Jews as foreigners, and are persecuted by the Greeks; yet those who hate them are unable to assign any reason for their hatred.

*Mathetes = “A Disciple”, almost certainly a disciple of St. John the Theologian
Posted by Fr. Gregory Joyce at 9:37 PM