The Russian side of my family left Russia's Far East in the early 1920s as the Red Army approached. They were land owners and clergy and by that time it was quite clear that the only future they had in the soon to be Soviet Union was as casualties of the Bolshevik terror. So they fled to China and then emigrated to America.

But the Lord saw otherwise than to allow Russia to remain an officially Godless state, and when the Soviet Union disintegrated in the 1990s it again became possible to worship God openly and without fear of recrimination (to be sure, as with almost all historical persecutions, there were more and less difficult times during the Soviet period for the Church). That is not to say that God was not worshiped in the Soviet Union. Of course He was. Perhaps in some of the most pure, intense, and selfless ways that He has been worshiped since the time of the Roman persecutions or the Turkish Yoke. In all times and at all places, whenever the Orthodox Faith has been persecuted it has grown in depth and in breadth. As noted in a recent post, Tertullian wrote that the blood of the martyrs waters the seed of the Church. This is true in Russia today as well, although because of the length and intensity of the persecution in the Soviet Union it is going to take some time to undo the secularization that has taken place here - or perhaps better put: to allow the watering of that seed to fully flower. That is not my opinion - it is the opinion of some of the most senior priests and bishops in Russia and Ukraine today. That being said, here one can witness the most significant resurrection of the Church after a persecution in her history - and it is something truly inspiring to witness!

Today I flew in to Moscow and had the opportunity to meet with my gracious hosts, Fr. Sergei and Matushka Larissa Kiselev. For those who don't immediately put 2+2 together, they are the parents of our own Lisa Kiselev who has been studying at Washtenaw Community College and been actively involved in our parish for the last four academic years. Liza is here too of course, and she is a big help as I negotiate some of the peculiarities of the megalopolis that is Moscow. Our parish council member Mikhail Fisenkov met with us today too. We had the opportunity to finalize the presentation we are making to potential donors here as we continue our "friend raising" efforts towards building our new church, hall, and school with Bishop Peter's blessing.

I also had the opportunity to meet a very interesting priest, Fr. Konstantin Bufetev. Fr. Konstantin did not become a priest through the usual seminary route. In fact, he has the highest Russian educational attainment as a Geologist, and despite (really perhaps because of) that high educational attainment he is a believer and a servant of the Lord as a priest. Some of you might have heard of Fr. Konstantin - he wrote a very interesting book which is a compilation of the Holy Fathers about the Creation of the World. That book is not available yet in English, but we talked seriously about how we can get to that point sooner rather than later. The pictures included in this post are of us talking with Fr. Konstantin - he is on the far left Fr. Sergei is between us, and Matushka Larissa on the right.

Updates from Uglich may take a few days. Or they may not. We'll know when we get there what kind of connectivity is available. In the mean time, I ask your prayers for safe and fruitful travel. I also invite questions or comments from those who would like to make those here. 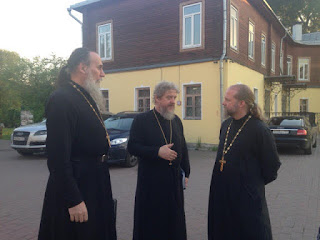 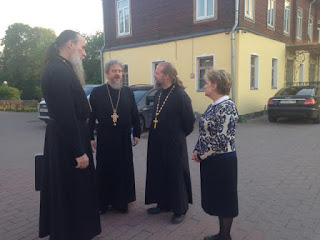